For the most part, they’re unelected. But they’re given enormous power to determine the outer bounds of the possible – both domestically (under the first ceiling), and internationally (under the second).

In a series of blog posts, I’ll be exploring some of the classic writings of the role of judges in our social life, beginning first with good ol’ Adam Smith.

Adam Smith was perhaps best known for his theory of the “invisible hand,” which has since been used to celebrate the social-ordering virtues of selfishness. Less well known is his considerable writing on morality, where he argued that “one’s individual merit is contingent and dependent on the happiness and merit of others” (Malloy, 1987, at 229). His 1759 Theory of Moral Sentiments outlines a preliminary model linking civilizational development to judicial-institutional outcomes, which is developed further in his 1760s jurisprudence lectures. His 1776 Wealth of Nations ­builds somewhat on this account by examining the method of financing justice.

In Smith’s Theory of Moral Sentiments, he writes that humans have made three attempts to codify moral principles: ethics (as practiced by the Ancient Greeks and Romans), casuistry (as practiced by the Catholic Church in the Middle Ages), and jurisprudence. The first is an attempt to outline broadly agreeable social expressions of the sentiments of our hearts, without any attempt to imbed them in specific social situations. The second was an attempt to make case-by-case, detailed prescriptions of how a “good man” would behave in concrete situations, irrespective of sociological context. The third endeavor is about attempting to divine general rules from nature about “what the person to whom the obligation is due, ought to think himself entitled to exact by force,” as would be confirmed by impartial spectators and judges. These enumerated “rules of justice and positive law” never perfectly attain natural jurisprudence, but are attempts to move towards it.[i]

Smith illustrates the difference between casuistry and jurisprudence by recourse to the highwayman who extorts travelers with threats to take “your money or your life.” For jurisprudence, it is clear that the “contract” that a traveler makes with such highwayman should not be enforced, because it would be adding one wrong on top of another. For the casuists, the conclusion would be less clear, since the integrity of the traveler might be undermined if his promises were not kept. In short, casuistry’s obsessive search for the chaste and virtuous response to every possible situation led to excessive precedent production that is “dry and disagreeable, abounding in abstruse and metaphysical distinctions, but incapable of exciting in the heart any of those emotions which it is the principal use of books of morality to excite.” While casuistry prescribes “rules of the conduct of a good man,” it “is the end of jurisprudence to prescribe rules for the decisions of judges and arbiters.” (Smith, 1759, at VII.VI.2 through VII.VI.33)

What explains the emergence of jurisprudence? Smith writes that governments are “under a necessity of employing the power of the commonwealth” to create it in order to prevent the confusion of vigilante justice. Indeed, governments that “have acquired any considerable authority” undertake to “do justice to all” and promise “to hear and to redress every complaint of injury.”

Smith goes on to explain variation in the quality of the judiciary across nations:

“In all well-governed states too, not only judges are appointed for determining the controversies of individuals, but rules are prescribed for regulating the decisions of those judges; and these rules are, in general, intended to coincide with those of natural justice. It does not, indeed, always happen that they do so in every instance. Sometimes what is called the constitution of the state, that is, the interest of the government; sometimes the interest of particular orders of men who tyrannize the government, warp the positive laws of the country from what natural justice would prescribe. In some countries, the rudeness and barbarism of the people hinder the natural sentiments of justice from arriving at that accuracy and precision which, in more civilized nations, they naturally attain to. Their laws are, like their manners, gross and rude and undistinguishing. In other countries the unfortunate constitution of their courts of judicature hinders any regular system of jurisprudence from ever establishing itself among them, though the improved manners of the people may be such as would admit of the most accurate. In no country do the decisions of positive law coincide exactly, in every case, with the rules which the natural sense of justice would dictate. Systems of positive law, therefore, though they deserve the greatest authority, as the records of the sentiments of mankind in different ages and nations, yet can never be regarded as accurate systems of the rules of natural justice.” (Smith, 1759, at VII.IV.36)

Smith concludes by noting his disappointment with previous efforts to distill a universal international law of jurisprudence, noting that these efforts have focused more on what good policing (defense) demands rather than what justice demands. He promises to return to this quandary in later work.

Figure 1 outlines the theory of judicial emergence from Smith’s Theory of Moral Sentiments. The challenge for countries is to move from Nature 1 (i.e. vigilante rule, or rule by baser passions) to Nature 2 (i.e. the jurisprudence that we ought to follow reflecting a perfected state of nature). The tides of civilization and authority take countries ever closer to approximating (but never fully reaching) the ideal of natural jurisprudence. The barriers along the way are represented by the circles, and include alleged cultural, political or institutional deficiencies. 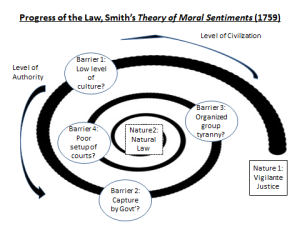 [i] Smith would later contrast ethics with jurisprudence by saying that the former is about the protection of imperfect rights, whereas the latter is about protecting perfect rights (i.e. those established by title or law).